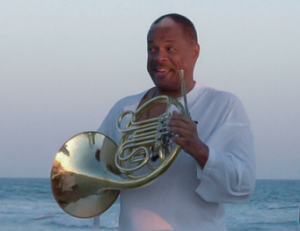 In advanced praise, Atlanta Audio Club’s Phil Music glows about Watt’s “music world”; that in the album, one gets “a clear impression of [the French horn’s] idiomatic sounds.” He also notes that “Watt and Cochran do some of their best work together”, calling it a “distinguished collaboration” and an “experience”.

Finnish conductor and composer Esa-Pekka Salonen also glowed about the album: “I recently had the pleasure of hearing Bob Watt’s newly recorded CD master. What a delightful collection of works, old and new, for horn in various contexts! This record covers a good chunk of the history of music (from Bach to present day), and everything is performed with gusto, great skill and beautiful tone. This is a different horn record, a very entertaining one, and deserves attention.”

Many musical guests appear on the projects in the form strings, guitars, percussion, and vocals, with Cochran’s “Laughter” and “Humor/Satire” both featuring cellist Fang Fang Xu. With a fusion of influences including classical, new music, and jazz, this project has a high art sensibility that holds it together. The late author and historian Paul Robeson, Jr. wrote the album’s liner notes.

The sprawling musical influences come off naturally and authentically as the result of the kaleidoscopic nature of Watt’s past. He notes: “As a symphony orchestra French horn player, I have performed in a wide range of large orchestral works, encompassing the entire spectrum of musical periods, as well as in television, motion picture scores, pop, R&B recordings and contemporary jazz. This varied exposure to the multitudes of musical styles and flavors has enriched both my life and my musical path.”

For more information about Bob Watt and Todd Cochran, please visit both robertleewatt.com and toddcochran.com.