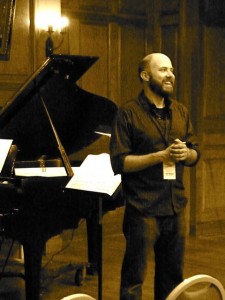 Peter McDowell is an arts management expert with more than two decades of experience serving artists and organizations at the highest level. Currently Director of Development for American Friends of the Louvre in Los Angeles, he has held leadership positions at Opera America, the Chicago Department of Cultural Affairs, and most recently as managing director of the Grammy-winning ensemble Eighth Blackbird. His firm, Peter McDowell Arts Consulting, offers a wide range of strategic career services for performing artists. As a publicist, Peter has garnered press coverage for his clients in the New York Times, Chicago Tribune, Los Angeles Times, the New Yorker, and many other important outlets.

Arts Management Consultant Peter McDowell has built a solid career on high-level, strategic, creative, and effective service to performing arts organizations and performing artists. Music (jazz, new music, opera, classical) and dance are particular focuses. He recently completed a three-year DeVos Institute Fellowship and serves on the board of the Beverly Blossom Foundation.

On behalf of his clients, as a publicist, Peter has placed feature interviews in media such as the Huffington Post, the Baltimore Sun and WGN and KUSC radio stations and has secured reviews in the New York Times, Chicago Tribune, New City, and L.A Times. He has received critics choices for clients in publications such as Time Out New York and received coveted listings in the New York Times, the New Yorker, the Village Voice, Opera News and NPR Music as well as reviews on blogs and print publications such as Brooklyn Vegan, Signal to Noise, All About Jazz, The Big City, New Music Jukebox, Lucid Culture, Step Tempest, Feast of Music, and The Glass.

Together with web designer and developer Ari Salomon, Peter has created PerformSites, a company which builds WordPress web sites for visual and performing artists.

Peter also serves as an event producer and curator and was responsible for programming 10 stages of live, free music in the DUMBO neighborhood of Brooklyn as part of Make Music New York. He also curated the Union Square Stage for The September Concert (free concerts with the goal of promoting international peace through music) on September 11th.

Since February 2018, Peter serves as Development Director for American Friends of the Louvre in Los Angeles. Prior to this, he was Managing Director of four time Grammy winning chamber music ensemble Eighth Blackbird. During Peter’s tenure, the organization won a game changing $400,000 MacArthur Award for Creative and Effective Institutions as well as a prestigious two-year Bloomberg Award. While Peter was at the helm of Eighth Blackbird, he shepherded the company through a transformation that included board development, increased earned and contributed income, the development of a formalized giving program, staff and ensemble pay increases, and universal health coverage for all full time staff and musicians.

From 1997-2006, Peter was a Program Director for the Chicago Department of Cultural Affairs where he presented and produced over 1000 music, dance, ﬁlm/video and theater programs. Highlights of his tenure include a free summer opera program involving eight annual professional opera productions, which featured a chorus of 14-21 year old at-risk youth alongside professional young soloists. Also of note was his “Vocal Journeys” series featuring operatic vocalists in intimate free concerts. He was a co-curator of the opening weekend at Chicagoʼs prestigious new Millennium Park and produced a park-wide tribute to Stephen Sondheim.

He is the recipient of fellowships from the National Endowment for the Arts (NEA), the German Academic Exchange Service (DAAD), and the International Society for the Performing Arts. Peter was selected as the only American of 34 participants to take part in the ﬁrst European Festival Association Atelier for Young Festival Managers in Görlitz, Germany in 2006. He has served as a panelist for the NEAʼs Access to Artistic Excellence in Presenting grants and has served as an evaluator for the Multi Arts Production (MAP) Fund in New York.

Peter served for over two years as Director of Programs at OPERA America in New York City where he led the Artistic Services and Education departments. During his time there, Peter oversaw many programs including workshops, seminars, and OPERA Americaʼs educational curriculum and granting program. He led the Individual Artist programming committee for the National Performing Arts Convention in Denver, co-produced the ﬁrst ever NEA Opera Honors Program and pioneered the ﬁrst Director-Designer Showcase. Peter is ﬂuent in French and German and formerly served as Vice President of the Board of Trustees of the DAAD US Alumni Association in New York.

Read more about the Services we offer to our clients…