This performance is the fourth of five Main Stage programs throughout the Sinfonietta’s 30th Anniversary Season. Maestro Mei-Ann Chen, who is Music Director of Chicago Sinfonietta, will conduct. Chicago Sinfonietta is Chicago’s professional orchestra dedicated to modeling and promoting diversity, inclusion, and both racial and cultural equity in the arts. 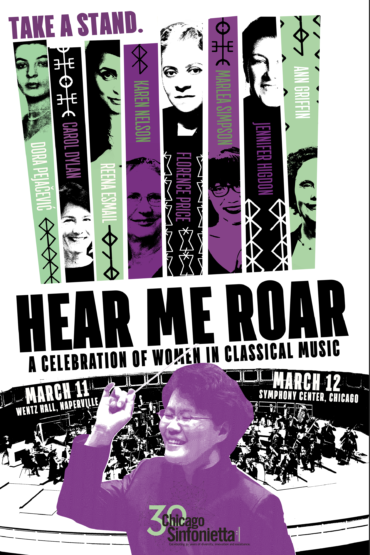 Tickets range from $20-$99 for concerts at Symphony Center and $49-$62 for concerts at North Central College with special $10 pricing available for students at both concerts. Tickets can be purchased by calling Chicago Sinfonietta at 312-284- 1554 or online at chicagosinfonietta.org. Hear Me Roar is sponsored in part by Skadden, ITW, and Fifth Third Bank, in partnership with YWCA Metropolitan Chicago. Chicago Sinfonietta Season Sponsors include Blue Cross Blue Shield, Aon, and Southwest Airlines.

Ticket holders are invited pre-show and during intermission to experience activities with Girls Rock! Chicago and YWCA. These activities are presented as part of BRIDGE – Chicago Sinfonietta’s audience engagement thematic concert programming established to break social, racial, and economic barriers within the symphonic experience.

Leading Women Executives, an experiential program for high-potential women who are prepared to advance from senior management roles to executive leadership positions, is sponsoring a private event for their alumnae prior to the concert, with Motorola Solutions as co-host. The pre-concert event includes a networking reception & panel discussion with a panel of female conductors, composers and musicians.

“Hear Me Roar takes Chicago Sinfonietta into uncharted repertoire with two major new commissions among three Chicago Premieres” says Music Director Chen. She continues: “the entire program is comprised of incredible works created by women composers – both past and present. While Jennifer Higdon and Reena Esmail represent the new generation of composers who are making symphonic history with every piece they compose, Florence Price and Dora Pejačević wrote music that has literally become the hidden gem of the orchestral repertoire as very few music lovers know their music well. With less than 2% of the symphonic repertoire annually performed by American professional orchestras being works written by women, the Chicago Sinfonietta has hit the national radar championing for one of the most underrepresented minorities in the classical music world – the women who expressed their life experiences through the musical voices of symphony orchestras.”