Proceeds from ticket sales to benefit the Kneisel Hall Chamber Music School and Festival in Blue Hill, Maine, one of the country’s leading chamber music schools that Mr. Lipkin led as director for nearly 30 years.

Seymour Lipkin, noted pianist, teacher and conductor, passed away in November  2015 (New York Times Tribute). One year later, his former students and contemporaries will pay tribute to the teacher, musical collaborator, and mentor who impacted them so greatly in a memorial concert to be held at New York’s Weill Recital Hall at Carnegie Hall on November 9, 2016 at 7:30pm. The concert will feature a robust program (see program below) with performances by pianists Koji Attwood, Steve Beck, Andrius Zlabys, Jenny Q Chai, Rieko Aizawa, Lora Tchekoratova, Ieva Jokubaviciute, as well as Laurie Smukler, violin and Joel Krosnick, cello (see bios below).

All proceeds from ticket sales will benefit the Kneisel Hall Chamber Music School and Festival. Located in Blue Hill, Maine, Kneisel Hall, known as “the cradle of chamber music in America,” has provided musicians with the opportunity to immerse themselves in the chamber repertoire since 1902, realizing founder Franz Kneisel’s vision for over 100 years. During his nearly 30 years as director, Lipkin shaped the culture of the school and fortified its mission with a seriousness of purpose as Kneisel Hall evolved into a leading institution in the teaching of chamber music.

Says pianist Lora Tchekoratova of Mr. Lipkin, “He taught us to have the utmost respect for the great classical composers, to devote our lives to in-depth study of their music, to find a way to get as close as possible to their intentions, and to channel their spirit in our interpretations. Many of his students went on to have great careers as soloists. He inspired a diverse group: some dedicated their lives to new music, quite a few became great chamber musicians, others went on to become teachers themselves. Under his leadership Kneisel Hall became one of the leading chamber music schools in the country, where all young artists are selected very carefully and attend on full scholarship.”

Works to be performed include:

“I first wanted to be musician at age 3. I never made a conscious decision, it was just such a big part of my life-and I never considered anything else. There was never any question about it, or thought that I would be, say, an economist, God forbid.” -Seymour Lipkin 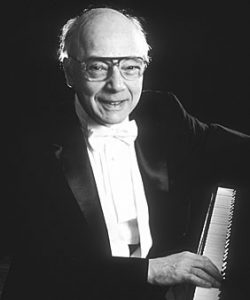 Born in Detroit in May 1927, Seymour Lipkin was instantly surrounded by music. His Grandfather was an accomplished violinist, and his parents encouraged his interest in music throughout his childhood. Mr. Lipkin received a Bachelors of Music from Curtis Institute of Music in 1947 and later joined their faculty. In addition, Mr. Lipkin was a faculty member at Juilliard beginning in 1986 and taught at Manhattan School of Music, New England Conservatory, and Marymount College. Highlights of his extensive career include first prize in the Rachmaninoff Fund Piano Contest in 1948, solo performances with the Boston Symphony and New York Philharmonic, and the conducting of various shows including the New York City Opera and the Joffrey Ballet. 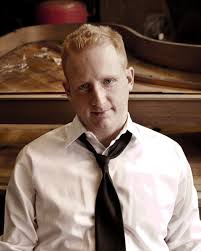 Steven Beck is an experienced performer of new music, having worked with Elliott Carter, Pierre Boulez, Henri Dutilleux, Charles Wuorinen, George Crumb, George Perle, and Fred Lerdahl, and performed with ensembles such as Speculum Musicae, the New York New Music Ensemble, and the Da Capo Chamber Players. He is a member of the Knights and the Talea Ensemble. He is also a member of Quattro Mani, a piano duo specializing in contemporary music. Mr. Beck’s discography includes Peter Lieberson’s third piano concerto (for Bridge Records) and a recording of Elliott Carter’s “Double Concerto” on Albany Records. stevenbeckpiano.com 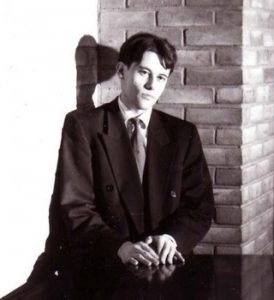 A Kansas native, made his solo debut at the age of ten, and one year later won 2nd prize at the Young Keyboard Artists International Competition. Mr. Attwood has performed numerous solo recitals across the country, including concerts in Steinway Hall, Lincoln Center, and on the Kosciuszko Foundation Concert Series. He received a Bachelor of Music degree from the Curtis Institute of Music. He then went on to earn a Master of Music and a Doctor of Musical Arts degree from the Juilliard School. Mr. Attwood’s recent performances include a highly acclaimed d recital at Merkin Hall in New York City, a European debut at the prestigious Husum festival in Germany, and invitation by the Fondation Cziffra to perform at the Chapelle Royale Saint-Frambourg in France.        yamaha.com/artists/kojiattwood.html 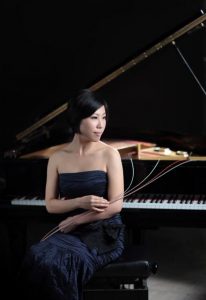 About Jenny Q Chai
An artist of singular vision, pianist Jenny Q Chai is widely renowned for her ability to illuminate musical connections throughout the centuries. With razor-sharp intention, Chai integrates her prodigy’s training with personal fascinations in the latest in live electronics, artificial intelligence, and environmental research, creating layered multimedia programs and events which explore and unite elements of science, nature, and art. Also of note, Ms. Chai designs all her performance gowns and some jewelry, in order to present a more united performance aesthetic, akin to the idea of Wagnerian Gesamtkunstwerk. Ms. Chai has performed across the globe, headlining venues from Carnegie Hall in New York City to the National Performing Arts Center in Beijing, China. JennyChai.com 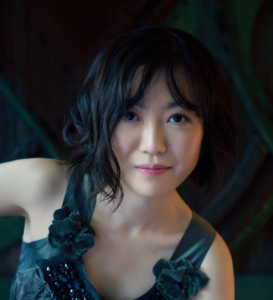 Praised by the NY Times for her “impressive musicality, a crisp touch and expressive phrasing,” Japanese pianist Rieko Aizawa has performed in solo and orchestral engagements worldwide, including Lincoln Center’s Avery Fisher Hall, Boston’s Symphony Hall and Chicago’s Orchestra Hall. Ms. Aizawa received her Masters Degree from the Juilliard School.  She is also a graduate of the Curtis Institute of
Music in Philadelphia, where she was awarded the prestigious Rachmaninoff Prize. March 2005 marked the release of Ms. Aizawa’s first solo recording on the Japanese label Altus Music. Ms. Aizawa lives in  New York City, and she is on the faculty at Longy School of Music of Bard College.  riekoaizawa.com/ 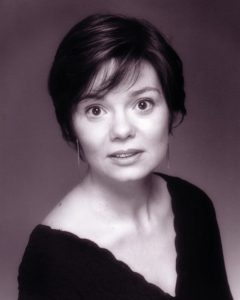 Lora Tchekoratova has been praised for her virtuoso performances of piano music from the 19th and 20th centuries. In her vast repertoire, she shows a particular interest towards the music from Eastern Europe. Ms. Tchekoratova was born in Sofia, Bulgaria. She began her piano studies at age four. Although she is a sought-after soloist, she spends significant time performing chamber music. She has made numerous recordings for radio and television stations in the United States, Finland, Sweden, and Bulgaria. In 2005, together with distinguished Bulgarian musicians, and the American Foundation for Bulgaria, she co-founded the concert series Bulgarian Concert Evenings in New York at the   Consulate General of the Republic of Bulgaria in New York. bceny.org/Lora-Tchekoratova 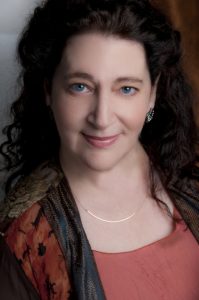 Admired for her vivid musical ontensity and the beauty of her sound, Laurie Smukler is an artist who is active as soloist and recitalist, as well as being a much sought after chamber musician. Ms. Smukler received a Bachelor of Music degree from the Juilliard School. As the original and founding first violinist of the Mendelssohn String Quartet, she spent eight years with that group, traveling and performing internationally. She also performed and toured as the first violinist of the Bard Festival String Quartet and the Purchase Faculty String Quartet. She has performed and toured with the Lincoln Center Chamber Music Society, and Music From Marlboro. Laurie Smukler is a dedicated and passionate teacher. She is a respected member of the faculties of the Julliard School,
Manhattan School of Music, and the Conservatory of
Music at Bard College. juilliard.edu/faculty/laurie-smukler 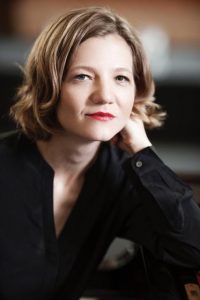 Lithuanian pianist Ieva Jokubaviciute’s intricately crafted performances and ability to communicate the essential substance of a work has led critics to describe her as possessing ‘razor-sharp intelligence and wit”; (The Washington Post) and as ‘an artist of commanding technique,
refined temperament and persuasive insight’ (The New York Times). In 2006, she was honored as a recipient of a Borletti-Buitoni Trust Fellowship. A much sought after chamber musician, Ieva’s collaborative endeavors have brought her to major stages around the world, such as: Carnegie Hall’s Stern Auditorium, London’s Wigmore Hall, and Washington DC’s Kennedy Center. In the fall of 2015, Ieva began her tenure as Assistant Professor, Piano at Shenandoah Conservatory in Winchester, VA. ievajokubaviciute.com/ 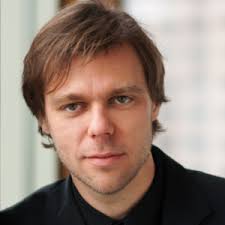 Grammy-nominated pianist Andrius Žlabys has received international acclaim for his appearances with many of the world’s leading orchestras, including The New York Philharmonic, Boston Symphony Orchestra, Cleveland Orchestra, Rotterdam Symphony, and Philharmonic Orchestra of Buenos Aires. Born in Lithuania and trained at the Curtis Institute of Music, Mr. Žlabys was 18 years old when the Chicago Tribune wrote: “Pianist-composer Andrius Žlabys is one of the most gifted young keyboard artists to emerge in years.”  Mr. Žlabys’s concerts have included appearances on many of the world’s leading stages, such as Avery Fisher    Hall at Lincoln Center, Concertgebouw, Carnegie Hall, Phillips Collection, Teatro Colón, Wigmore Hall, Vienna’s Musikverein and Suntory Hall. andriuszlabys.com 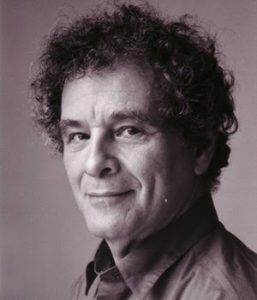 Joel Krosnick has performed as soloist, recitalist, and chamber musician around the world. As a member of the Juilliard String Quartet since 1974, he has performed the great quartet literature throughout N
orth America, Europe, Asia, and Australia. With his sonata partner of more than 30 years, pianist Gilbert Kalish, Mr. Krosnick has performed recitals throughout the U. S. and Europe. Since 1976, they have given annual series of recitals in New York City and in 2007 presented the series “American Milestones of the Last 100 Years” at The Juilliard School. A dedicated teacher, Mr. Krosnick is chair of the cello department of The Juilliard School and is a member of the faculty of Kneisel Hall Chamber Music Festival in Maine. juilliardquartet.org/joel-krosnick