Prelude Cocktail is a collection of “major works for short attention spans,” including two world premieres and newly arranged favorites curated and performed by American flute and marimba duo Lawler + Fadoul. This CD is currently available for sale at CDBaby and will soon be available on Amazon and on iTunes.

The duo, featuring Zara Lawler, flutes; and Paul J. Fadoul, marimba and vibraphone, is celebrating this release with a series of house concerts in Massachusetts, New York and Washington, D.C.  Two public CD release concerts will be held on November 21, 2013, 7:30pm. at the Mansion at Strathmore (Shapiro Music Room) at Strathmore, Bethesda, MD; and at Edmonton Recital Society, Muttart Hall, Alberta College Conservatory of Music, Canada on November 27 at 7:30pm

Preludes are musical cocktails:  intriguing and intoxicating on their own, they also hold the promise of something more to come.  You might share cocktails before a big meal, just as a prelude often introduces a more substantial fugue.  Cocktails can be sweet (think of a Cosmo!), strong (gin martini), classic (Tom Collins, anyone?) or new and adventurous (what’s that one that is Red Bull and vodka?), and Lawler + Fadoul’s selections from four centuries of preludes are equally eclectic.  Prelude Cocktail includes two world premiere sets of preludes by American composers Katherine Hoover and Roshanne Etezady, as well as Lawler + Fadoul’s own brand new arrangements of favorites of the genre by Debussy, Gershwin, Bach, Chopin, Shostakovich and Scriabin.  Guest clarinetist, Christopher Grymes, joins the duo on two preludes and fugues by Shostakovich. 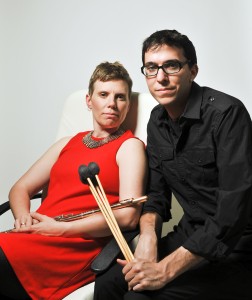 venues, including the Kennedy Center, Strathmore, Trinity Wall Street, and Vermont’s Yellow Barn Music School. Their Gronica Project is an ongoing program to increase the repertoire for their instrumentation both by commissioning new works from living composers and by creating their own arrangements of favorite works of the past. This CD is the culmination of the first years of the Gronica Project, which focused on preludes and fugues. (Lawler’s family coined the word gronica to describe a child’s main present at Christmas.)  Dedicated and creative educators, Lawler + Fadoul are teaching artists for the National Symphony Orchestra in Washington, DC, and created Break it Down! for a week of Kinderkonzerts at the Kennedy Center in February 2013. They have worked as a duo since 2003.

Flutist Zara Lawler is known for innovative work  that combines music, dance, theater, and poetry. In 2012 she staged the US première of Salvatore Sciarrino’s Il Cerchio Tagliato dei Suoni for 104 flutes at the Guggenheim Museum. She has performed her solo program, The Flute on its Feet, in venues across the US, with choreographer C. Neil Parsons. For many years, Lawler was flutist and Co-Artistic Director with Tales & Scales, touring the country performing works that integrated contemporary classical music with dance and theater, for children and family audiences. She studied at Juilliard with Carol Wincenc and Sam Baron.

Marimbist Paul J. Fadoul has performed solo and chamber music performances across North America and Spain, with such artists as Evan Ziporyn, Martin Bresnick, Robert van Sice, and the National Symphony Orchestra. He spends his summers in Newfoundland, where he composes, arranges and performs with the Canadian ensemble, Dark By Five. While touring with the educational ensemble Tales & Scales, he performed 200 shows annually, including solo performances with the Milwaukee, Buffalo, and Oregon symphonies. He graduated from the Yale School of Music and has taught at the Peabody Institute.