Composer David Claman has released a fascinating and eclectic collection of exceptionally diverse works on his new album – aptly titled – “Gradus.”  His musical explorations take us through a broad range of artistic expression and diverse sonic experiences.

As an informed contemporary composer of our global age, he draws inspiration from many aspects of culture, history, and style – but with respect, integrity, and a deep understanding of the intricacies that form the basis of music as a unique vehicle of human communication.

The roster of musicians on this album is impressive.  This is a fine collection of interesting and compelling works.

Between music that sends you on a journey of textures, styles, and with support from places like SoundWordSight, Vents Magazine, and kind support from industry colleagues, Gradus is surely an album worth your attention.

Meet just some of the musicians that contributed their talents to Claman’s vision below:

STEVE MACKEY – a GRAMMY Award® winner, lauded by Gramophone for his “explosive and ethereal imagination” – is regarded as one of the leading composers of his generation, with compositions ranging from orchestral and chamber music to dance and opera. Born in 1956 to American parents stationed in Frankfurt, Germany, his first musical passion was playing the electric guitar in rock bands based in northern California. He blazed a trail in the 1980s and ‘90s by including the electric guitar and vernacular music influences in his classical concert music. He regularly performs his own work, including three electric guitar concertos and numerous solo and chamber works. He is also active as an improvising musician, and performs regularly with his band Big Farm.

New York City native OREN FADER is highly regarded as a performer of classical and electric guitar repertoire, from Bach to Babbitt. For the last 30 years, he has performed around the globe to critical acclaim, both as soloist and chamber musician.

In addition to performing as a soloist, Mr. Fader is much in demand as a New York City chamber musician. He has performed hundreds of concerts with a wide range of classical and new music groups, including the Met Chamber Ensemble (directed by James Levine), New York City Opera, New York Philharmonic, New York City Ballet, Mark Morris Dance Group, Saint Paul Chamber Orchestra, New World Symphony, and many others.

Guitar by Fader, cello by Susannah Chapman, violin by Calvin Wiersma, mandolin from William Anderson, vocals by Jessica Bowers and Elizabeth Farnum, and lyrics by Dr. A. Dasarathan

Praised by the New York Times for her “honeyed tone”, ELIZABETH FARNUM is one of the world’s most highly sought-after vocalists in the field of modern music. Widely known for her high level of musicianship, versatility and range, she has performed in several genres and has toured throughout the United States, Europe, Japan and Australia with a number of varied ensembles.

For the past 15 years, Elizabeth has specialized in modern music, for which she is world-renowned. She has performed in venues such as Lincoln Center, Alice Tully Hall, London’s Institute for Contemporary Art, the American Academy at Rome, the Concertgebouw in Amsterdam and the Library of Congress, collaborating with such composers as Samuel Adler, Ricky Ian Gordon, John Harbison, Peter Schickele, Charles Wuorinen and John Zorn. She has appeared as a guest soloist with many prominent modern music ensembles throughout the U.S. and Europe. A prolific studio artist, Elizabeth has been featured on over 30 recordings, four of which were nominated for Grammy awards, on such labels as DeutscheGrammophon/Archiv, Delos, Bis, Naxos and Koch.

With vocals by Farnum, piano by John McDonald, and poetry by David Ignatow. 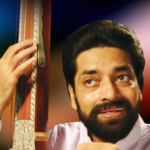 FATHER PAUL POOVATHINGAL, popularly known as ‘Paadum Paathiri’, disciple of Padmabhushan Dr. K. J. Yesudas and Chandramana Narayanan Namboothiri, is an ordained priest in the congregation of Carmalites of Mary Immaculate, a religious order founded by blessed Cyriac Elias Chavara. He is the first Christian Priest who has completed Ph.D. in Karnatic music in India. He has shown great aptitude in music right from his childhood. Though he was initiated into Karnatic music at the age 17 by Sodharan Bhagavathar, it is only after his priestly studies that he started learning Karnatic music seriously. Nevertheless, during his studies in philosophy and theology at Dharmaram College, Bangalore, he continued his music education under the tutelage of Vidwan Bangalore V. K. Krishnamurthy.

After having graduated in English and Psychology from Christ College Bangalore, in 1992, he joined the Faculty of Music and Fine Arts in Delhi University and passed Sangita Shiromani course (B.A. Music) with first rank and passed M.A. Music with a gold medal. In Delhi, he learned music from Prof. T. R. Subramaniam, Dr. Guruvayoor T. V. Manikandan and Dr. Vasanti Rao.

Poovathingal has composed a number of albums both in Hindi and Malayalam. His compositions include Karnatic music forms such as Kriti, Kirthanam and other popular forms like Bhajans, Hymns, Ballet, National Integration songs and Awareness songs.

Tara is a member of the woodwind quintet Windscape, the legendary Bach Aria Group and is a founding member of the Naumburg Award-winning New Millennium Ensemble. She has premiered hundreds of new works and has collaborated with the Orion String Quartet, St. Lawrence Quartet and Emerson Quartet. Tara has appeared on A&E’s Breakfast for the Arts, Live from Lincoln Center and has recorded for Deutsche Grammophon, EMI Classics, Koch International, CMS Studio Recordings with the Chamber Music Society of Lincoln Center and Bridge Records.

Tara is Associate Professor of Flute, Head of the Woodwinds Department and the Coordinator of Classical Music Studies at Purchase College School of the Arts Conservatory of Music. Additionally, Tara is on the faculty of Bard College Conservatory of Music, the Contemporary Performance Program at Manhattan School of Music and is a visiting artist, teacher and coach at the Royal Conservatory of Music in Toronto.  She lives with her husband, violinist Daniel Phillips and their two miniature dachshunds, Chloé and Ava on the Upper West Side of Manhattan.

With alto flute by O’Connor and percussion by Ian Rosenbaum 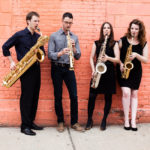 NEW THREAD QUARTET was formed with the mission to develop and perform impactful new music for the saxophone, and to provide high level ensemble playing to feature today’s compositional voices. In 5 seasons, the quartet has commissioned and premiered over 20 new works by composers such as Richard Carrick, Ben Hjertmann, Scott Wollschleger, and Kathryn Salfelder, with recent commissions from Max Grafe and Taylor Brook as part of its annual Explorations concert series.

Based in New York City, NTQ has performed at Carnegie Hall, Roulette, Dance Theatre of Harlem, the Bang on a Can Summer Festival Benefit, Monadnock Music, and the World Saxophone Congress in St. Andrews, Scotland, and has performed or recorded more than 30 important works for saxophone quartet including Kati Agócs’ Hymn on New England Conservatory’s Composer Series at Jordan Hall, a revival of Michael Djupstrom’s 2001 work Test at Arizona State University’s Katzin Concert Hall, and the premiere recording of Elliott Sharp’s seminal work Approaching the Arches of Corti for 4 soprano saxophones, now available on New World Records.

Performed by the New Thread Quartet