MICHELLE AREYZAGA is an American soprano, held in high regard by orchestras and opera companies throughout the United States and abroad. Known as a foremost interpreter of vocal art song and chamber music, she has often been selected to perform world premieres of many new works by American composers. She has also held several prominent operatic roles, and has performed as a soloist with the Minnesota Orchestra, the Israel Philharmonic, and the National Orchestra of Costa Rica, among others.

As a recording artist, she has released a collaborative album of women writers set to song titled Were I With Thee (4Tay), with pianist Dana Brown. Other recordings include Songs from Spoon River (Cedille) by Lita Grier; The Small Hours, songs by William Ferris; and a set of song cycles by Gwyneth Walker on The Sun Is Love (Proteus). She is a frequent guest on Chicago’s classical music radio station WFMT. 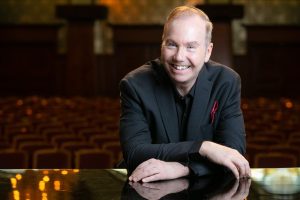 American pianist DANA BROWN is highly regarded for both his solo and collaborative performances. As a pianist, he has been heard many times on 98.7 WFMT Radio as a collaborator and soloist, in addition to performances at the Ravinia Festival, the Tanglewood Festival, Light Opera Works, the Chicago Cultural Center and the Chicago Humanities Festival. His concerto appearances have been in the works of Beethoven, Brahms, Gershwin, Grieg and Mendelssohn, including a performance of the “Emperor” Concerto with the Beethoven Society Pops Orchestra of Washington, DC. In November 2018, he appeared as soloist with Orchestra Seattle in the Ravel Left Hand Concerto.

A nationally prominent vocal coach, he has coached at the Ryan Opera Center at Lyric Opera of Chicago, where he also played lessons and masterclasses of Marilyn Horne, Renata Scotto, Renée Fleming and Sir Andrew Davis.  He is  also the Collaborative Piano liaison to the Central Regional Board of the National Association of Teachers of Singing.