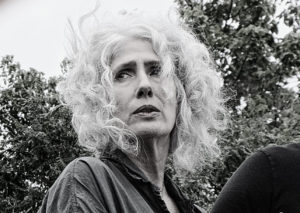 Fides Krucker (fideskrucker.com) is an innovative interpreter and creator of vocal music in Canada and abroad. She founded the interdisciplinary performance ensemble URGE; their fifth and final work was published by Playwrights Canada in 2015. Her company, Good Hair Day Productions created and produced the groundbreaking lyric-theatre pieces: Girl With No Door On Her Mouth (Bartley/Carson); CP Salon, an r n’ b love and disability show with Kazumi Tsuruoka, now an NFB film; Julie Sits Waiting (Dufort/Walmsley), a sexual catastrophe, electroacoustic opera nominated for five Doras; and In This Body, an emotional landscape of Canadian pop songs by women sung by Fides and danced by Peggy Baker, Laurence Lemieux and Heidi Strauss. It premiered at Canadian Stage last season and a CD featuring musicians Rob Clutton, Tania Gill and Germaine Liu is available through fideskrucker.com.

Fides has collaborated extensively with Peggy Baker Dance Projects composing vocal scores for the dancers of land/body/breath (at the AGO and National Gallery), locus plot and phase space, for which she received a composition award. She sang like a mermaid for both the theatre production and recording of DIVE (Nik Beeson/Richard Sanger.) Her recording of Berio’s Folk Songs with Vancouver’s Turning Point Ensemble was recently released on the European label Orlando and her performance was noted for its “blazing theatricality and playful brilliance.” Fides teaches voice at Humber College and facilitates vocal work for a wide range of Toronto artists as well as Chicago’s Walkabout Theater. She is editing the final draft of her book, Good Girls Don’t Sing, initially researched through a Chalmers’ Arts Fellowship.